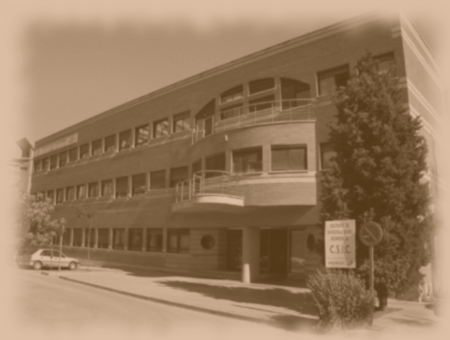 The "Alberto Sols" Biomedical Research Institute (Instituto de Investigaciones Biomédicas "Alberto Sols", IIBM) is a joint Centre of the Higher Science Research Council (Consejo Superior de Investigaciones Cientificas, CSIC) and the Autonomous University of Madrid (Universidad Autónoma de Madrid, UAM). It is located in the campus of the Medical School of the UAM. The origin of the present Institute was the Enzymology Institute of the CSIC, founded by Alberto Sols, which moved from the Centre for Biological Research (CIB, Centro de Investigaciones Biológicas) to the Medical School of the recently founded UAM in 1971. The people from the Enzymology Institute took charge of teaching Biochemistry at the Medical School. At that time the Biochemistry Department of the UAM was created and the first UAM/CSIC agreement was signed. Later on, in 1975 the group of Experimental Endocrinology, founded by Gabriella Morreale and Francisco Escobar, also moved from the CIB to the Medical School of the UAM. This group was located in laboratories provided by the Morphology Department. The IIB was created in 1984 by the merger of the Enzymology Institute and the Experimental Endocrinology group. The Institute continued to share the above-mentioned locations in the Medical School with people from the UAM, but it was a CSIC Centre.

The CSIC and the UAM signed an agreement in 1988 that gave support to the activity of the people from the IIB (CSIC) and the Department of Biochemistry of the UAM on an equal footing.

The present Research Lines of the IIBM derived from those of the Experimental Endocrinology group and those of the Enzymology Institute reinforced with the new ones contributed by the researchers incorporated during all these years. Researchers are presently organized in the following Departments: Cancer Biology, Endocrine and Nervous System Pathophysiologies, Metabolism and Cell Signaling, and Experimental Models of Human Disease.

The staff of the IIBM engages in intense teaching activity that can be summarized in the organization of 20 courses in the undergraduate degrees of Medicine, Biochemistry and Nutrition and 14 courses in the masters' degrees for Biomedicine, Molecular and Cell Biology, Biotechnology, Biophysics and Neurosciences of the UAM. The IIB also organizes the Biochemistry, Molecular Biology and Biomedicine doctoral thesis program that has received a Quality Mention from the Education Ministry.

The IIBM is currently an active partner of the International Campus of Excellence, especially in the BUC (Biocampus UAM CSIC) initiative. Within this initiative, we are deeply involved in the technology platform INNOTEC (advanced technologies for the creation and characterization of animal models). The IIBM maintains the first trimodal equipment (microPET, microSPECT and microCT) installed in Spain. This equipment, together with the High Field Magnetic Resonance Imaging and Spectroscopy Service (SIERMAC) will make the IIBM an international reference center in non-invasive molecular imaging.