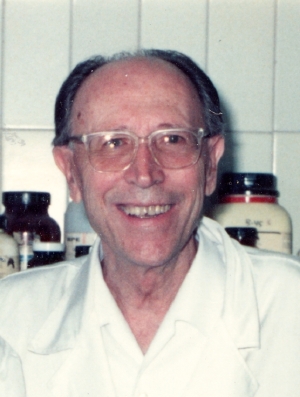 The Biomedical Research Institute is named after Alberto Sols in honor of the memory of a person unanimously recognized as the most important driving force in the initiation and development of modern biochemistry in Spain.

Alberto Sols was born in 1917 in Sax, a small town in Alicante province in Eastern Spain. He started his medical studies in Valencia and finished them in Madrid after the Spanish Civil War. He established himself in Barcelona where he began his studies on the mechanism for the absorption of sugars by the intestine. A few years later, he joined the laboratory of Carl and Gerty Cory in St. Louis, Missouri, at the time one of the leading enzymology laboratories in the world. His two years at the Cory laboratory decisively influenced his future career. Back in Spain and struggling with multiple difficulties, he formed a small research group in Madrid dedicated to the study of enzymes in carbohydrate metabolism. The group was located at the recently built Centro de Investigaciones Biológicas (CIB) of the Consejo Superior de Investigaciones Científicas (CSIC). The rigor and high quality of his research was greatly appreciated by many colleagues so that his work became a kind of a standard for quality in the country. This attracted to his laboratory young students desirous of conducting high quality research in Biochemistry. Some of those students became leaders in the growing field of Biochemistry and Molecular Biology in Spain.

In the early seventies, his group moved to the newly created Medical School of the Universidad Autónoma de Madrid (UAM) where he became Full Professor some years later.

Alberto Sols was one of the discoverers of hepatic glucokinase and its regulation by insulin and he described for the first time an allosteric effector for hexokinase, an enzyme whose specificity he had studied in great detail. He made important contributions to the understanding of the regulation of phosphofructokinase, another key enzyme in carbohydrate metabolism. He was also the main promoter in the creation of the Spanish Biochemistry Society founded in 1963.

He received numerous honors and awards in recognition of his important work. He passed away suddenly during his summer holidays in 1989 at the age of 72.